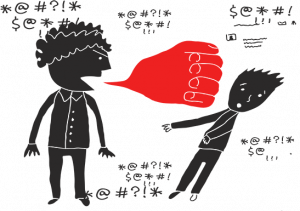 Emotional abuse does not leave physical scars or bruises, yet, its soul-crushing effects are just as devastating…
Say no to emotional abuse Hazel Mullen* (42), wishes she could tell parents what she realised much too late in life.

Teach your children to distinguish between friendship and manipulation.

She begs, Help them understand the difference between love versus power and control. Make sure they know that it is never okay to compromise your own self worth for the sake of being accepted by others, or to make them feel better about themselves.

Hazel knows from experience that emotional abuse does not leave physical scars or bruises. Yet, its soul-crushing effects are just as devastating.

For 20 years, she never thought of her marriage as particularly bad, but it was not particularly good either. In fact, it was painfully destructive at times.

Hazel learnt very early on that, as long as she obeyed the “rules”, life at home was bearable. These “rules” ranged from anything as mundane as the way she stirred her husband’s coffee or hung up the bathroom towel, to more serious offences relating to how she wore her hair or behaved in public.

Whenever she stepped beyond the line, she was either punished with a flood of degrading words, ignored for days on end or forbidden to leave the house. Peace at home was determined by how well she managed to live life according to his standards a and turning a blind eye to his mistakes (which were far more serious, as he was unfaithful many times, even though he promised every time that it was his last).

Twenty years of empty promises and emotional abuse finally got to her I stayed for two decades because I believed that if I left I would be the failure.

I would have failed in doing what I was taught as a little girl: always put others first and their happiness before your own. says Hazel.

For me, divorce meant failing to be the wife my husband deserved. I even believed his infidelity was because of my inability to make him happy. It is only now, five years after our split and two years into therapy, that I realise how skewed my perceptions were.

I based my worth on his behaviour.

Abuse is rife in South African society, which is why Sappi, Childline and the NSPCA have embarked on a national campaign to highlight the fact that all forms of abuse (against humans, animals and the environment) are interconnected â?? and therefore unacceptable.

Although it is statistically difficult to prove, emotional abuse could be the most prevalent Lorette Dye, a qualified psychological counsellor from Pretoria, confirms that the majority of her clients, as much as 70%, are victims of emotional abuse.

She says it is destroying their lives on a grand scale.

She explains that it is the secretiveness of the act, the lack of outward physical signs and the victim’s belief that if they just tried harder, they’ll be able to change the circumstances that keep them stuck in their prison of abuse.

In addition, because emotional abuse is often rooted in manipulation, victims wrongly believe that they deserve to be treated this way. They lose their sense of self and their ability to distinguish between what is an acceptable way to be treated, and what is not.

What is emotional abuse?

It is hard to find a formal definition for emotional abuse, but it often occurs in situations or relationships where a person is constantly bombarded with negative messages about themselves.

It can range from being verbally attacked, to being emotionally forced or manipulated into doing something, or being someone, that makes the victim feel utterly uncomfortable.

Emotional abuse can also mean being intentionally neglected, rejected or ignored or exercising extreme control over a person by using fear. An abusive relationship is characterised by the building of emotional walls and showing how strong you are (as the victim).

In contrast, healthy relationships are about breaking down walls, by allowing oneself to be vulnerable and feeling at peace with who you are.

Most people have a good sense of right and wrong behaviour, but with victims of emotional abuse this sense starts to fade over timesays Lorette. They start to believe everything they’re told through the abuser’s words or actions: that they are bad, not good enough, not able, not deserving.

They no longer trust their own abilities.

They cling to the hope that if they try harder (or do more, act better), the other person will change.

Unfortunately, this hardly ever happens.

Being an abuser often has to do with the character of a person; something inside that persona’s being that causes them to be abusive, she explains.

It’s not impossible for an abuser to change, but change only comes from within, from wanting to be different; from opening up and being willing to find and deal with the root causes of their behaviour.

Lorette has developed a trained eye to identify people who are being emotionally abused. In many cases the person’s eyes have lost their sparkle; there is a kind of deadness in them. She can also pick it up in their body language.

Their demeanour projects the message, I’m not worth anything. Also, in emotionally abused women and children you can pick up their sense of fear and distrust. They seem confused at times, emotionally detached; and they easily retreat into a bubble as a way to protect themselves.

Just like physical abuse, emotional abuse is a vicious circle from which many victims feel unable to escape. However, escape and healing is possible. For Hazel it meant looking at the history of her situation and, based on that, making a decision about whether she wanted to continue on the same path into the future.

I came to a point where I had to accept that, despite all my efforts over many years, nothing was changing (except my self-esteem, for the worse). In an absurd way, staying was “safe” I knew the rules, and if I stayed within them I at least had the status of being married, the security of a roof over my head and financial provision for the children. But staying also destroyed my soul. I lost myself, my will.

I didn’t know who I was, or why I was anymore.

Helping an emotionally abused person is not as easy as simply telling them that the way they are being treated is wrong. All you’re doing is adding more pressure to their situation â?? and pressure is the last thing they can handle. They will simply turn away from you. says Lorette.

The better alternative is to be a friend, an ear to listen, someone who highlights and brings out the good in them.

To the person being emotionally abused, Lorette’s advice is to step back and take an honest look at the situation

and if it is abusive half of the time, is it worth choosing to spend half of your life fearful and unhappy?

The only way to escape the cycle is to make a mental choice, not an emotional choice, to walk out and rediscover yourself,says Lorette. But the longer you wait, the deeper the emotional scars and the more difficult the healing process.

Once the mental choice has been made, she advises victims to seek professional assistance to help them stand strong on their road to healing.

Emotional abuse may be abstract, but that does not make it less real, she concludes.

It is wrong, and as a society we should fight it in the same way as we fight physical abuse.

Visit www.stopabuse.co.za to find out more about the Abuse is Abuse campaign, the different forms of abuse and where to find help.

* Not her real surname